Back in September, probably sometime between campaigns, I sent a note to the team at Atmotube, asking if I could review their product. They quickly said yes, and within a couple weeks I had an Atmotube Pro device clipped near-constantly to my belt loop, where it’s been most days for the last 2 months.

Atmotube is a personal air quality monitor—it tracks humidity, temperature, barometric pressure, particulate matter (10 and 2.5) and volatile organic compounds (VOCs). We’ve had a lot of time to get acquainted, as when after a month of use I’d planned to write this, I got a lung infection and blah blah blah. Not why we are here (but it will come up).

There are two models of the Atmotube, the tube-looking one and the Pro, which is the version they sent me. There are some functional differences between the two, but for me, I was most happy with the battery life on the Pro. I have mine set to test the air quality every 10 minutes, since I’m usually at home. As I understand it, it also does on-demand tests when you hit the button, so when I’m curious, that’s a good option too.

Pressing the button illuminates the multicoloured LED present just above the button—the colour displayed corresponds to the colour the monitor associates with the air quality, from blue [great] to red [poor] with green, yellow and orange in the middle. It also does an on-demand air quality test. Opening the app gives you a greater sense of what your environmental air “looks like” at a given moment in time. Here’s one from as I’m editing this article:

I should really move the air purifier to the kitchen. More on that shortly.

First days with the Atmotube Pro
I sent a lot of messages to friends during the first few days with the Atmotube—this thing is COOL. I wore it out the first night I got it, but was outside most of the evening in great air quality, so my results were as expected. The next day, though, is clear in my mind. Here’s what my day looked like:
Noon – Left home to go to Staples and Shoppers Drug Mart.
12:45 – Shoppers drug mart asked I come back in an hour and a half for my flu shot.
1 PM – Arrived at a nearby apartment building to canvass for the federal election.
2 PM – Completed canvassing 2 floors, walked back to the mall.
2:10 – Went to the food court for a root beer
2:15 – Arrived back at the pharmacy
2:45ish – Returned to the apartment building, chatted with seniors, finally began canvassing again.
4:40 PM – Left apartment to walk to meet my parents for my mom’s birthday dinner. Immediately upon opening door (my hand was still on it!), the Atmotube app IMMEDIATELY alerted the humidity had dropped past the set threshold. My mind was BLOWN how fast it was.
5:05 PM – Finally get to near restaurant but we are not going there anymore. Get in the car.
5:15 PM – Arrive at Mongo’s Grill, an open-grill Mongolian-style stir-fry restaurant if you couldn’t guess.
5:20 PM – Atmotube continues to freak out about high particulate matter for the duration of the meal.
6:30 PM – Arrive home, where the air quality is consistently decent-but-not-great.

Here’s what the graphs look like from that day:

Beyond everyday use
Within a week of getting the Atmotube, I headed off to Philadelphia. The device itself stores data while not connected to a smartphone, so being on the plane didn’t hinder my data collection (although I think it was still connected). The air quality was surprisingly good on all 4 of my flights, which I found interesting—and shocking! The hotel also didn’t cause me any asthma issues as they sometimes do, and the air quality there was also consistently good!

My friend John also has an Atmotube, and he noted the air quality in the hospital he works in isn’t great – when I went to Urgent Care a couple months ago, I forgot to take the Atmotube with me, which is disappointing because I was sort of looking forward to that experiment!

What I’ve learned from the Atmotube
I’ve learned a few things from using Atmotube. Here’s the most interesting one:

I very quickly noted sharp drops in air quality when cooking. I checked out a Government of Canada document that notes running the stove exhaust fan when cooking to be helpful for promoting indoor air quality (by drawing the particulate matter out of the house) – I’d love to speak to how the data from Atmotube Pro actually changes but I assume there are many variables involved that would make this complicated for my non-scientist brain to wrap around—ie. duration of cooking, what is being cooked and how, when or whether the exhaust fan was turned on, and device proximity. I can say the effects are a consistent drop in air quality with most stovetop cooking, though (as first noted at Mongo’s). As I wrote this section, my dad was just making food on the stovetop (with the exhaust fan on), some sort of grilled sandwich, as well as making coffee in the percolator. When I opened up the app a minute ago, the air quality score was about 50 – but the sensor is down the hall. Now it’s 66, sensor still down the hall, about 12 steps away.

The next is that some buses appear to have worse air quality than others, even when riding on the same route. I am curious if this is bus-model specific, but haven’t yet been able to determine reliably. It’s fascinating (but also sucky?).

Oh, and this will surprise no one: It’s true – hockey arenas have poor air quality.
So do food courts.

Changes I’ve made
Related to the stove exhaust, we try to run it more frequently when cooking on the stovetop.  I have purchased a “pluggable” “air sanitizer” (mostly because it was on sale for $30) made by Germ Guardian that is apparently good for minimizing cooking odours—it wasn’t running when the above food related numbers were cited. Of course, it’s really difficult to tell how well it works because “food odours” are pretty subjective, and I’m going to assume, the particles released are perhaps not super uniform.
But check it out—here’s a small peak in particulate matter during food prep time: 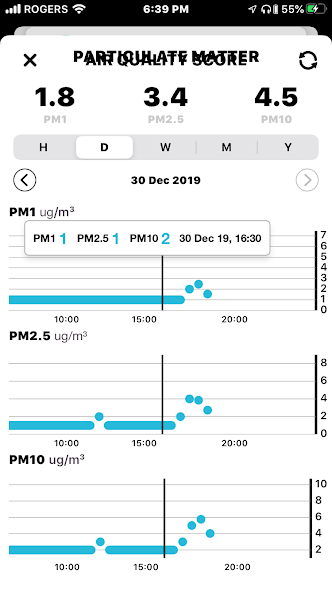 Though generally our house air quality scores are quite good overall, I also ordered an air purifier on Boxing Day (a JS FLO). And damn, I can tell you, the Atmotube says that thing actually works—here are the graphs. The first 2 are from the first time I turned the air purifier on. The third is from the day where I heard you should run the air purifier for a couple hours before you go to bed (makes sense, no?) so I left the Atmotube in my room with it. 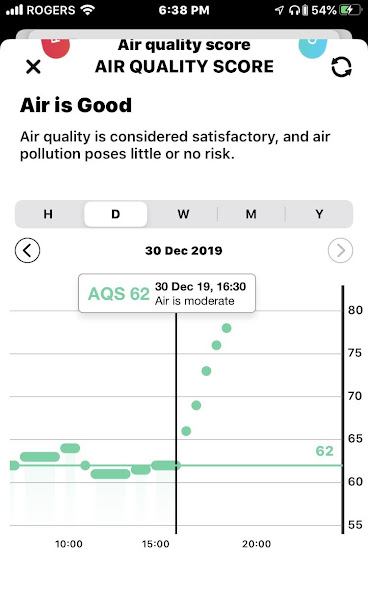 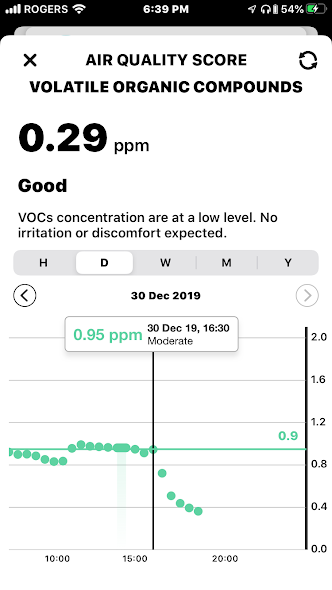 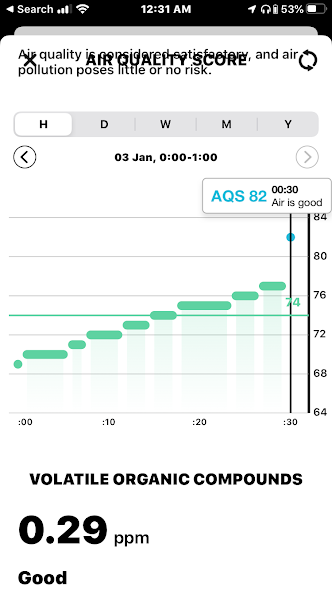 If it isn’t clear, air quality score (AQS) should go up, VOCs (and particulate matter) should go down.

The first, with the LED, you have to hold the device at a very particular angle to see the actual corresponding colour to the current air quality—if you move the device around, you see different colours. For this (and for the greater amount of data), I prefer to use the app.

The device also comes pre-calibrated, and states it does not require regular calibration as it will continue to calibrate as it works. In mid-November (coincidentally, just as I was getting sick with that lung infection), I was getting consistently lower readings. This is also right when it got colder, and I assumed, when the furnace was running more—so, having asthma, I attributed this to why I was feeling cruddy. (As determined later, it was a lung infection leading to the asthma issues.) I did hit the recalibrate button. The change in results (which improved), of course, lead to questioning on my part of the accuracy of the device—it’s generally been consistent . I’d love to do side-by-side comparisons between two devices, such as with another Atmotube Pro, or a different personal air quality monitor (I think there’s maybe one other on the market right now), to see if results are consistent. I still think given my experiences—ie. poor air quality on buses with doors constantly opening and closing in traffic, realistic responses to humid environments and temperature changes, and so on—that the device is reliable.

There’s also a barometer function that I really don’t use—the scale goes from “stormy” to “very dry”, and it’s always apparently “stormy” with low pressure. I don’t know much about this, but I certainly know it’s currently cold but calm outside!

Oh and this isn’t really a problem, but more of a funny: the Atmotube always alerts me to poor air quality when I do a nebulizer treatment. The particles are likely 5-7 micrometres, which is near certainly registering in the atmotube as an influx of PM10 (which is particulate matter 10 micrometres or less in diameter. I will maintain that the Ventolin I am inhaling is good for my lungs and not a pollutant!

What I’d like to see
While the Atmotube has already given me so much more data and insight than I’d have expected possible—seriously, this thing is cool—the main thing I’d really like to see from the Atmotube app is actually a bit more different information. It does a good job of really concisely saying what you can do in general to improve indoor air quality, but it’d be nice to see, for instance, some information tailored to what you’re experiencing. “Hey. Your PM2.5 is increasing. If you’re cooking, try running the hood fan.” “Hey, your house seems pretty dry. Here’s what can help right now and over time.” (My house is apparently too dry all the time. Other than buying a humidifier, which I don’t want to do, I still don’t know what to do about that.” While I will say it has told me to get plants to increase my household humidity, I’ll say I’ve only been successful at keeping my cactus alive for several years… and it’s a cactus.
More actionable alerts rather than generalized articles would perhaps actually encourage people to do things to alter their indoor air quality, humidity, or so-forth. Like right now, I’d like to know where the heck the elevated VOCs are coming from causing the app to “alarm”!

I can also think of a number of great quantified self projects when I decide to dig into playing with the CSV files a bit more. But that is a nerdy pursuit for another day!

Who Atmotube is for
Are you a nerd who likes checking a device you’re wearing all the time? Do you have a health condition, like asthma or heart disease that makes it more important for you to know what you’re breathing? Are you willing to put some time in to devise patterns, do some research, and make your own inferences from the data the Atmotube is getting you? If yes to any or all of these (all = me), and you can make the financial investment, I’d say yes. I’ve found using the Atmotube the last several months fascinating and illuminating to what, exactly, is in the air I’m breathing.
Even if that happens to be Ventolin and it tells me its pollution. We can’t be totally perfect. 😉

Disclosure: I reached out to the makers of Atmotube, who sent me an Atmotube Pro device to review honestly (and keep) with no strings attached beyond just writing this article. They were fabulous answering my many questions, sending a reviewers guide, and being patient in all my delays getting this article out—thanks, Ariuna and Daria!